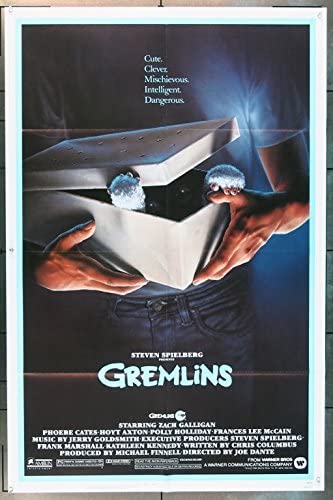 I love creature features! I have since I was a kid growing up on things ranging from the Syfy channel original Grizzly Rage to the classic werewolf movie Silver Bullet. I recently sat down to watch a childhood favorite about bad-mannered, violent and chaotic creatures unleashed on a small town on Christmas Eve. Gremlins.

Gremlins begins with a father purchasing a cute, cuddly creature called a Mogwai for his teen son as a Christmas present. (Actually, I think he sort of stole it after the owner said he wasn’t ready for the responsibility of caring for it). Regardless, the man ends up with the creature and gifts it to his son, Billy, who dubs the little guy Gizmo (voiced by none other than Howie Mandel).

Caring for the Mogwai means following three all-important rules: Keep him out of sunlight. It will kill him. Don’t get him wet. And whatever you do, no matter how much he begs, don’t feed him after midnight, or else he will turn into a chaotic and violent little green monster!

Needless to say, the rules are breached. Gizmo gets wet, causing him to spawn 4 or 5 more Mogwai. They pop out of his back like baseballs being put through a pitching machine, little balls of fur that grow rapidly into full-sized Mogwai. And just like that, five more Gizmos, only these aren’t as cute and kind-natured as Giz. But the worst is yet to come.

After the mischievous Mogwai cut the cord on Billy’s clock so that the time is frozen at 11:30 at night, they decide to beg for food. Billy checks the clock. “Well, it’s not after midnight yet,” he says. He serves the little furballs a whole plate of chicken, which they devour in a most vile manner as Gizmo watches in disgust from Billy’s bed.

Turns out, it was after midnight after all, because the loveable-looking creatures transform into sharp toothed, slightly larger and hairless green monsters. They unleash themselves on the town, multiplying into thousands when they get into the local pool, and pure, gleeful chaos ensues.

Gremlins is a personal classic. I grew up watching it as a kid, and I loved it. I recently watched it for the first time in years and enjoyed the heck out of it. It’s a fun movie, with tons of comedic, highly entertaining monster chaos. It has some genuinely funny moments, with Gremlins singing Christmas carols to a mean old lady before launching her out of a second-story window, and another Gremlin opening the jacket he’s wearing to flash a bartender.

One of my favorite moments happens in a bar after the gremlins have taken it over to throw themselves one heck of a party. A group of the nasty-mannered creatures is sitting around a table playing a card game. They are dressed like mobsters, sporting fedoras and dark jackets. One smokes a cigarette, leaving smoke floating about the dimly lit corner they’re in, which really sets the mood. One of them makes a move that the other doesn’t quite like, and gets capped on the spot. Maybe he was cheating, but not anymore.

This is a cheesy monster comedy, but an incredibly fun one, and sports a great musical score by Jerry Goldsmith. Check it out on your next movie night. Before you turn out the lights though, check your closet and check under your bed. There just might be a Gremlin in your house.