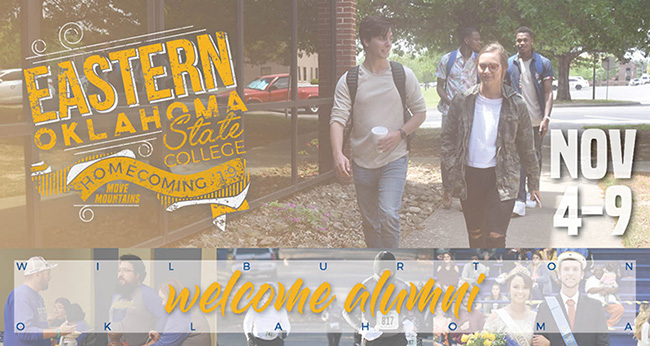 Eastern Oklahoma State College’s Homecoming Week was held from November 4 through November 9. Many events were spread throughout the week with dress-up days, school events and opportunities for spirit stick points.

Monday was the beginning of homecoming and started the day off with a pajama day and an Eastern scavenger hunt. The scavenger hunt was placed around the campus and any club who participated received spirit stick points. The first organization to finish the scavenger hunt was cheer.  Later that night was the community chili cook-off. This event is where student organizations make chili for spirit stick points and to win best chili. First place for the Faculty/Staff Division was Kellye Semeski. For Student Organization, Cheer won first while Aggie Club won taster’s choice.

Tuesday had a dress-up day of tie-dye or decade day where anyone could dress as their favorite decade. That night there was a men’s basketball game where and after the game, there was a street dance off in front of the Student Center and Cheer ended up winning the dance off.

Wednesday was Eastern day where everyone wore Eastern merchandise to show school spirit. This year Eastern decided to make wooden spirit signs and those were due in order to put on library lawn. It was also the day where organization advisors’ doors were decorated for spirit stick points.

Thursday had the dress-up day of ‘Redneck Day’ to where everyone wore their version of country fashion. Students made spirit signs to put on the basketball court so it would be decorated for Saturday and show how students support Eastern Mountaineer Basketball. Mr. Eastern took place in Mitchell Auditorium and this event is a satire version of beauty pageants where guys from organizations that participate pretend to be in a pageant.  The winner was Ryan Dean from the Ag Club and the Miss Congeniality was Alton Jones Junior from the Math and Science Club.

Saturday is the day of homecoming and will begin with the annual 5k and 1-Mile Fun Run in the morning starting at 10am. At noon is when there is a Tailgate at the Student Center Amphitheater where there will be free burgers, water, cookies and chips. During the tailgate will be when Eastern Expressions, a student cover band, performs while everyone else eats.

2:00pm is when homecoming begins with the women’s basketball game and in between the two games is when Coronation happened. During half-time of the men’s basketball game is when Lilli Martin and Monte Busby will be recognized with the EOSC Alumni Scholarship and the Spirit Stick winner will be announced.

Later that night will be the Agriculture Hall of Fame Celebration at 7:00pm in the Goddard Building. Ray Rice, of Duncan, Oklahoma, will be the inaugural inductee into the new hall of fame. Rice was an animal science instructor at EOSC from 1984 to 2007. He also coached the livestock judging team to great success. All the proceeds will contribute to scholarships for agricultural judging teams.